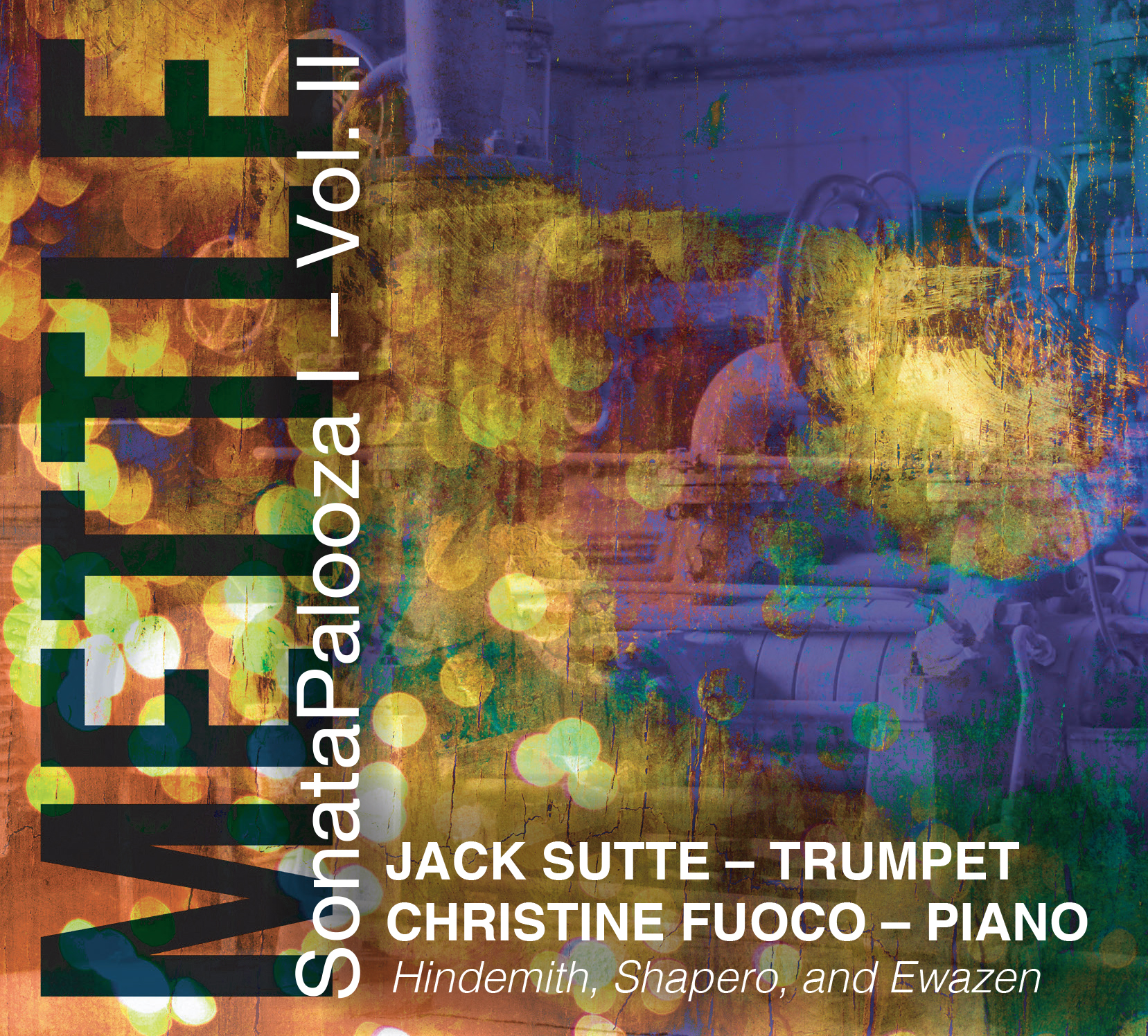 The bold idea of the SonataPalooza is to combine SonatenAbends (multiple sonata evenings) in a way that is fun and unusual. The title, METTLE, the first of the paloozas, is intentional – to describe the project’s scope (with fortitude, determination, and resolve) with the homonym wordplay of “metal.” Recorded at Baldwin Wallace Conservatory over the course of four, closely scheduled recitals in January 2019.

Paul Hindemith wrote his Sonata for Trumpet and Piano in November of 1939 during his exile in Bluche, Switzerland. He moved there with his wife due to the ban placed on his music by the National Socialist German Workers Party (Nazi Party). By the winter months of 1939, Europe had already witnessed the German annexation of Czechoslovakia, the blitzkrieg of Poland, and the ongoing horrors of the Holocaust.

In the Preface to an early edition of the Sonata, Hindemith wrote that “The Trumpet part can also be played by a clarinet in Bb or any other instrument of approximately the same range (oboe, violin, viola). This will result, of course, in only a makeshift substitute for the intended effect, and I do not advise such substitutions in public performance.” We incorporate these potential secondary performance offerings as a sub-guide to a color spectrum of string and woodwind chamber music, rather than one that leans on the bombast of overblown trumpet dynamics. The most recent Preface published by Editions Schott (written by Luitgard Schader and translated by Julia Rushworth), mentions Hindemith’s request to his publisher included with the delivery of the manuscript score: “I would appreciate it if you would make a photography [sic] of this trumpet sonata and send the manuscript back to me, as the piece has become part of our daily lives and we would be sorry to lose it.” Additionally, he gave his wife the manuscript of the sonata with the dedication, “For my dear and fearless pianist! P. Christmas ’39.” It is reasonable to surmise that Hindemith, perhaps on multiple instruments, and his wife, Gertrud, performed this work together while living in Switzerland. It is clear that Hindemith held this sonata in high esteem.

Our approach, reflective of the protests, lamentations, and human tragedies suffered in the early stages of WWII, is of a sonata fraught with rhythmic tension, stentorian outbursts, brooding lyricism, and playful “old world” reminiscences, all of which exhaustively yield to a postmodern setting of Bach’s chorale (BWV 634) “Alle Menschen müssen sterben.”

“All men must die”
All men living are but mortal
Yea, all flesh must fade as grass;
Only through death’s gloomy portal
To eternal Life we pass.
This frail body here must perish
Ere the heavenly joys it cherish,
Ere it gain the free reward
For the ransomed of the Lord.

The Sonata for C Trumpet and Piano is rarely performed or studied despite the abundant information available about Harold Shapero and his other works. Although his Sonata follows the basic compositional framework of classical models, Shapero clearly deviates from a strict homage to the classical style and, instead, incorporates a blend of early 20 th -century jazz and Stravinsky-influenced neoclassical elements.

Born in 1920 in Massachusetts, Harold Shapero came into contact with composers who influenced the development of his unique style (Sergey Slonimsky and Ernest Krenek). His teachers and peers also included Piston, Copland, Hindemith, Boulanger, Bernstein, and Stravinsky. He was born at the start of an era when composers were revitalizing classical values that had been championed by Beethoven, Mozart, and Haydn. Neoclassicism displayed a shifting away from a Romantic period of unrestrained emotionalism. Shapero also grew up in a musical landscape where jazz music was evolving in American culture. Aside from being classically trained, Shapero was an active jazz pianist and arranger who later served as Benny Goodman’s band arranger during the Swing Era (1930s-mid 1940s – a time of dance and “feel good” music).

Shapero was particularly close to Bernstein and Copland. Bernstein, whom Shapero was classmates with at Harvard University, may very well have inspired Shapero to incorporate jazz elements into his classical form. The Sonata was written and dedicated to Aaron Copland in 1940. Copland described Shapero as “the most gifted and the most baffling composer of his generation…,” criticizing Shapero for his steadfast devotion to neoclassical elements. The Trumpet Sonata is clearly characterized by two decidedly different musical traditions. The first movement resembles a lyrical jazz ballad with hints of the blues within the confines of classical composition. The piano part is stark, Copland-like, with simple half- and quarter-note rhythms, giving room for a singing voice to emerge from the trumpet. The second movement is playful and light, and shifts quickly in styles with changing time signatures all the while supporting the chromatic and rhythmic back-and-forth bantering between the piano and trumpet. Interspersed are bluesy sections where the piano “comps” as the trumpet bends and flexes freely in phrase and sound. The dichotomy of these varied elements gives the whole movement an improvisatory effect.

Eric Ewazen’s Sonata for Trumpet and Piano, commissioned by the International Trumpet Guild (ITG) in 1993, is a staple of the modern trumpeter’s repertoire. Ewazen’s music is some of the most accessible and compelling for performers and audience members alike. Trumpeter Chris Gekker, with the composer at the piano, premiered the work at the 1995 ITG Conference. Ewazen writes, “this is probably the most difficult piano accompaniment of any of my sonatas.

Even more difficult than the Trombone Sonata, this is the hardest one, so, kudos to the pianist that tackles this one.”

The score, and particularly the piano writing, could be described as a 20th-century mishmash redux of Brahms’s violin sonatas, some Beethoven piano sonatas, a sprinkle of Chopin, and a twist of your favorite score from the musical theater genre. His language is both sensibly lyrical and rhythmically driving. Both of those elements are recognizable in the large sonata form of the first movement, the beautiful Scottish-snap-inspired ballad, and the dramatic final movement, Allegro con Fuoco. In the third, an angular dual-instrument fanfare sets forth the drama, and the piano, again, is in constant motion as Ewazen sets the rondo form catapulting to and through the Coda like Ukrainian Gopak dancers. He writes of his musical conclusions, “… the music starts slow and gets faster and faster … becomes spectacular with unbelievable leaps … the music whirls with terrific exhilaration. So much of my music ends with big fast endings, and I trace this directly to that folk-music inspiration.”

Born in Cleveland, Ohio, Eric Ewazen has a few notable early influences that are of local interest. While a high school student, he studied with Baldwin Wallace University’s Dr. Walter Winzenberger, was a member of the Fortnightly Club of Cleveland, and has written a work for the Berea Schools band. Ewazen’s full biography and repertoire list can be found at www.ericewazen.com.

Pianist Christine Fuoco launched her dynamic career as a recitalist in Northeast Ohio and concertizes throughout the United States. She has performed with world-renowned opera singers Jane Eaglen and Nancy Maultsby, and with numerous members of The Cleveland Orchestra. In January 2019, Ms. Fuoco and Jack Sutte presented a four-concert recital series titled METTLE: SonataPalooza I, during which they performed and recorded twelve sonatas for trumpet and piano. Those works comprise the present four-disc set. In August 2019, they presented another four-concert series of twelve sonatas, titled REGALE: SonataPalooza II. Consistently expanding her contemporary music repertoire, Ms. Fuoco has performed significant works for saxophone and piano with Steven Banks, and in February 2020, premiered and recorded newly found saxophone and piano pieces by Pierre-Philippe Bauzin with Sean Murphy.

A native of the Pacific Northwest, she earned a Biology degree (Pre-Med) at the University of Puget Sound in Tacoma, Washington, while studying piano with Duane Hulbert and James Barbagallo. Christine Fuoco holds a Master of Music degree in Piano Performance from the Cleveland Institute of Music where she studied with Paul Schenly and received the prestigious Arthur Loesser Award for Excellence in both piano performance and academic achievement. Ms. Fuoco is a piano faculty member at the Baldwin Wallace University Conservatory of Music.