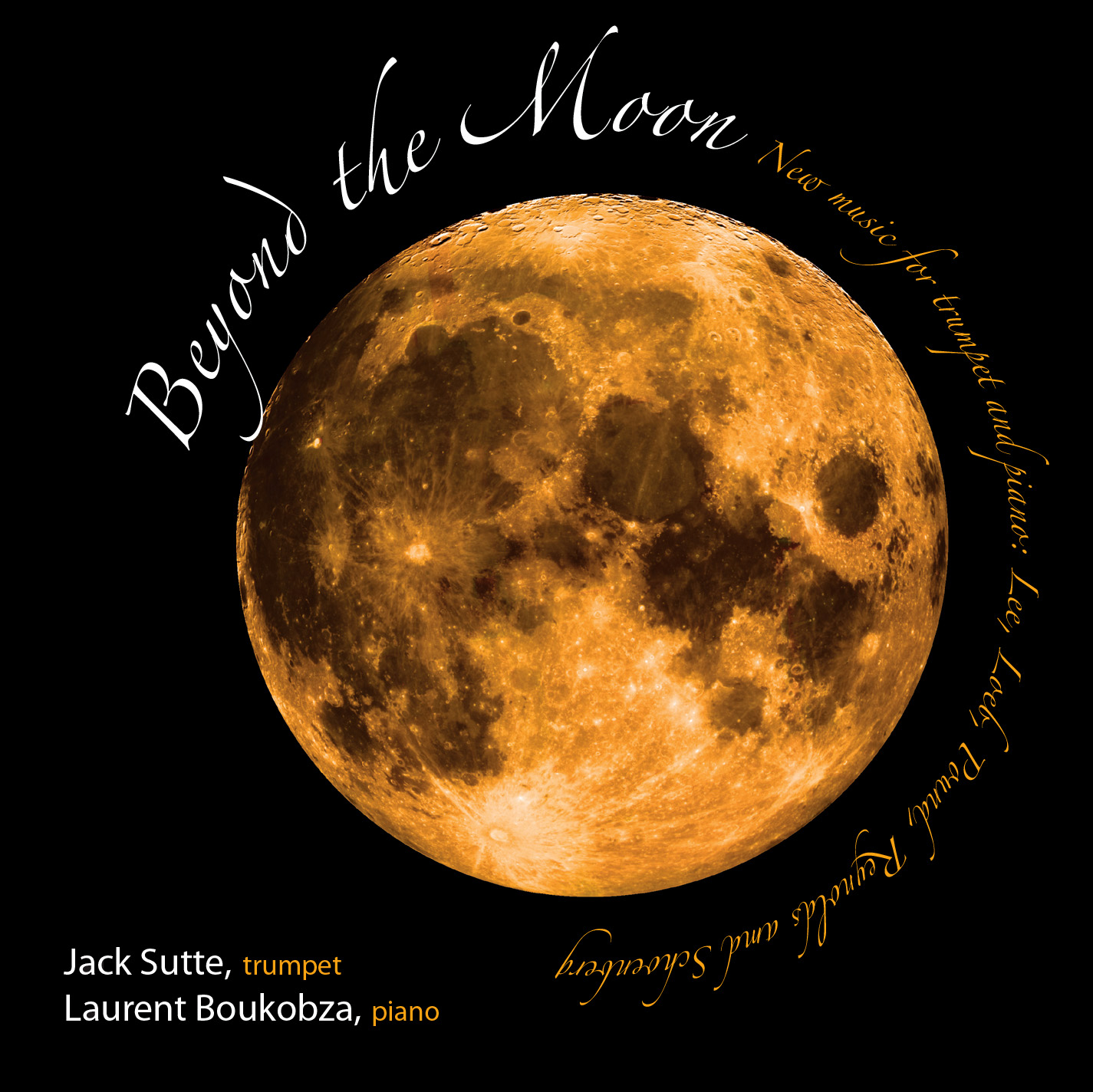 Beyond the Moon captures repertoire for trumpet and piano that has never been recorded. Each track on this recording represents a “new work” that encompasses musical possibilities which have evolved from an appreciative friendship with each composer. Laurent and I present this collection with pleasure to you, our audience. May our unique worlds of sound inspire you to follow a journey of harmonization with each other, our earth, and vibrations beyond the moon. Om.

Om is a life opportunity for the harmony expressed in the essence of music; people come together to love and celebrate the universal resonance of rhythm, sound, and spirit.

Separated by Space consists of three different movements that were individually conceived between 2001 and 2005.
Beyond the Moon was written during my second year at the Oberlin Conservatory of Music. One of Jack Sutte’s trumpet students asked me to write a new work for him, and Jack immediately took notice of the piece. He was the very first professional musician to express interest in my music, for which I am still most grateful. The other two movements may note have been written had Jack not encouraged be to do so.

Beyond the Moon is by far the most lyrical of all three movements. It is American in spirit and contains two different melodies woven throughout. The opening of the piece (trumpet plays inside the piano as the pianist keeps the sustain pedal down) introduces the material that later becomes the second melody. The first melody is announced after a series of rising and falling chords played by the pianist. This melody is more heroic in spirit, whereas the second melody is somber and more introverted.

Who’s There? was written in the fall of 2003, which marked my first semester in the master’s program at Juilliard. I was enrolled in a collaborative class for composers and choreographers, and I was required to write a new piece for a choreographer. Previously, Jack had asked for another movement, and I thought it would be fun to write this next movement knowing that someone was going to interpret it through dance. Because of this, I wanted a much more rhythmic, and lively piece. The movement is conceived in three sections: fast and square, slow and atmospheric, and fast and accented. The middle section also requires the trumpeter to play inside the piano. I wanted to find a way to somehow connect the two movements, since they were written two years apart from each other.

Sighting was conceptualized to not only function as the last movement of Separated of Space, but also as an individual encore piece. It is short, fast, and a little quirky!

READ FULL BIO
The music of composer Adam Schoenberg (b. November 15, 1980) has been hailed as “stunning” (Memphis Commercial Appeal), “open, bold, and optimistic” (Atlanta Journal-Constitution), and with an ability to create “mystery and sensuality”…

sleep cycle began as two lullabies, one for each of Jack’s children. Each lullaby develops a musical model for going to sleep: in one, intervals expand and harmonies gradually become less dense, in the other, a gradual descent in register parallels harmonic relaxation. Each lullaby therefore supplied a musical character, and from the interplay – pun intended – of those characters, the suite evolved: “late play,” a scrambling game of chase; reverie dream-like, fleeting distortions of music from the lullabies over a chaconne; and finally, a the reveille, a fanfare rousing the two children from the confusion of first waking. The work is dedicated to Jack and his family.

READ FULL BIO
Robert Pound’s numerous compositions include orchestral works for the Atlanta Symphony (Irrational Exuberance, 2005) and the Columbus (GA) Symphony, which commissioned a luminous jewel lone (2002) jointly with the River Center for the Performing…

“Litany” represented the idea of writing a piece with extensive repetition without in any way suggesting the minimalist style.

“Moresca” has two meanings: the word can imply either a dance of death or a Moorish dance. Monteverdi has one at the end of “Orfeo” but it doesn’t seem to fit either meaning.

READ FULL BIO
David Loeb studied composition with Peter Pindar Stearns at the Mannes College of Music in New York and later studied Japanese music with Shinichi Yuize. He has taught at Mannes since 1964 and also taught at the Curtis Institute of Music…

Frenetic Dream was written for Jack Sutte in 2001. Frenetic Dream makes use of a minimal amount of material (stated in the opening) which is then manipulated in various ways, first in a percussive manner and then more lyrical and romantic. The outer parts have a jagged rhythmic drive while the middle section has lyric melodic lines over perpetual motion. “HyeKyung’s music shows a penchant for colorful timbres, expressive lines, and lively rhythmic interaction of instruments. The result is a darkly expressive music….” (Don Womack)

Jack Sutte and Laurent Boukobza gave the premier performance of Reynold’s Sonata for Trumpet and Piano on April 29, 2010 at the University of Central Florida.

Capriccio opens with unhurried, soaring lines flowing at a natural pace. These expansive phrases build to a middle section which features brilliant, rapid patterns and sudden changes of character. The movement closes with a Lontano section in which the distant trumpet, using the “softest possible mute,” is juxtaposed with a thunderous piano strike. Repetitions of a low piano tone gradually fade until the muted trumpet remains alone.

Elegy weaves expressive, dark-toned melodies between the trumpet and piano. Two powerful outbursts from both instruments interrupt the brooding pace. The mesto mood returns, dissipates, and flows to a tranquil end.

Imitations pins angular imitative lines in joyous interplay briefly calmed by a barcarolle reminiscent of the Elegy. The piano reinvigorates the movement with frolicsome imitative ideas to which the trumpet responds. Rhythmic tension builds, bringing their voices together in a dancing conclusion.

READ FULL BIO
Verne Reynolds (1926 – 2011) Verne Reynolds began his music education at the age of 8 by studying piano. When he was 13 years of age he took up the horn. He served in the US Navy as a musician mostly playing piano for dance band gigs. Following his years of service...