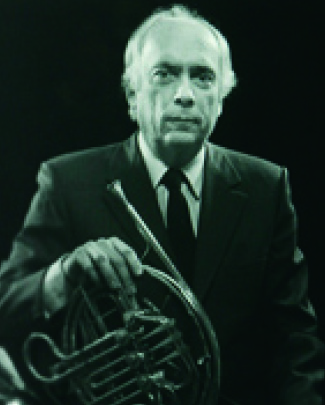 Verne Reynolds began his music education at the age of 8 by studying piano. When he was 13 years of age he took up the horn. He served in the US Navy as a musician mostly playing piano for dance band gigs. Following his years of service, he entered the Cincinnati Conservatory where he studied piano, horn, and composition, eventually becoming a composition major. Following his graduation, he auditioned for the Cincinnati Symphony and won a position in the horn section. After three seasons he accepted a teaching position at the University Wisconsin-Madison. While in Madison he also earned a master’s degree in Composition.

The early 1950s brought a Fullbright Scholarship at Royal College of Music in London. While there, Reynolds studied horn with phenom Dennis Brain. Back in the states he accepted a teaching position at Indiana University and then finally moved to the Eastman School of Music. This brought with it the opportunity to perform as principal horn of the Rochester Philharmonic, the American Woodwind Quintet, and the Eastman Brass Quintet. The ensembles at the Eastman School provided wonderful opportunities for Reynolds to play his craft of composition.

“There can be found three general styles in Reynolds’ career. Influences include Hindemith in the 1950s, Dodecaphonic in the 1960s and Free Style, using any techniques he knows from the 1970s, until he ceased composing. The Sonata for Trumpet and Piano falls into the later category and is considered to be one of his last compositions.” – Dr. Patricia Backhaus